This guide walks you through a series of steps to get you started working on PintOS.

Pintos is a simple operating system framework that supports very basic features. The objective is to strengthen the functionality of this OS. This involves working on various aspects of an operating system including:

Before starting, you’ll need to install the following dependencies

Head over to the Stanford’s site or click the link below to download the tar.gz file containing the PintOS source:
http://www.stanford.edu/class/cs140/projects/pintos/pintos.tar.gz (mirror)

Extract the contents to the directory of your choice. For the purpose of this post, I will assume that the contents were extracted to the $HOME directory.

The project requires you to run scripts present in /src/utils folder. Working on this project would be easier if you have this directory your in $PATH.

The easiest way to add /src/utils is as follows: 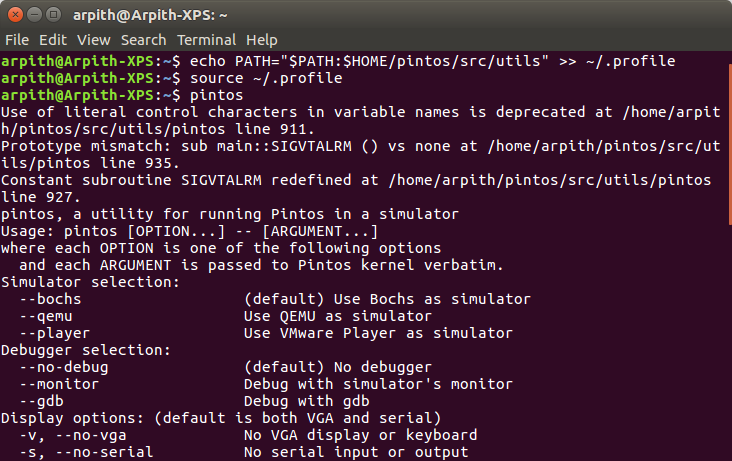 If you get the above output, congratulations! You just took your first baby step! :)

After you make the above changes, recompile with the make command and rerun alarm-single program in PintOS. 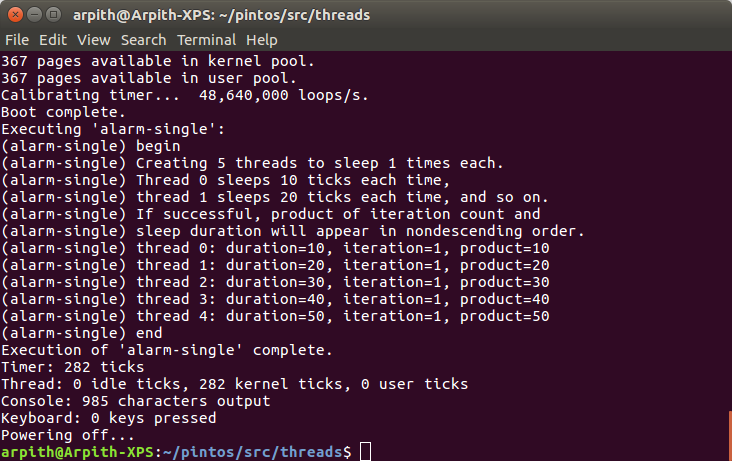 Congratulations! You should now have a program running in PintOS!

The source comes with predefined test cases which you would use through the course of this project to verify your implementation.

After building the project, you’ll see that a new directory called build is created. Go to that directory and execute
$ make check

Assuming that this is the first time you’re running PintOS and have not modified the original source code, most of the test cases would fail. For the first project, you’d have to implement alarm clock, priority scheduling and advanced scheduler. Once you have correctly implemented this, all test cases should pass.

While one could use Vim to edit your code and use ctags + cscope to navigate between them, I find working with Eclipse much easier.

To import the source code,

You should now be able to see all directories in the Project Explorer.

Some of the most commonly used shortcuts are

I used eclipse only as an editor. To build the project, the terminal was my friend.

Note: There are many ways to set up your working environment. One could use Vim while the other may prefer Gedit (o.O). Feel free to explore and learn.

Be sure to read the documentation provided by Stanford carefully.

Understand what you need to do and observe what the original source code already does. Spend some time designing the solution on a piece of paper before actually implementing it. This could potentially save a lot of time at a later stage.

All the best! See you on the other side :P